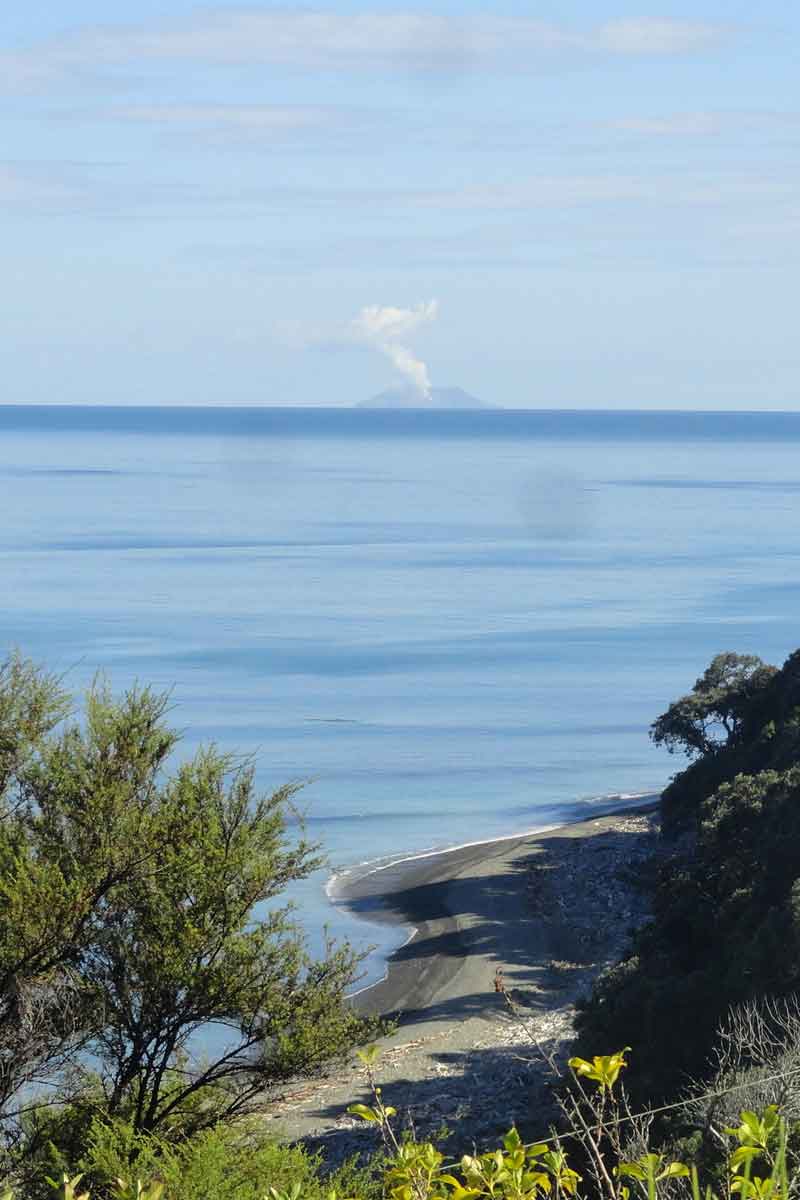 The Eastern Bay of Plenty

The Eastern Bay of Plenty is an area of land whose coastal boundaries run from Matata in the west to Cape Runaway in the East. There is a dramatic difference in landscape and population between the west and east.

As we travel further east the landscape becomes more and more sparsely populated and is dominated by rugged hills and streams which enter the pacific ocean mostly on rocky outcrops or pebbly beaches. This area, east of Opotiki is commonly referred to as “up the coast” and includes small settlements and towns like Torere, Opape, Omaio and Te Kaha.

There are a number of Islands in the Eastern Bay of Plenty but the largest and most accessible for fishing and diving is Moutohora / Whale Island which dominates the view out to sea from Thornton and Whakatane.

The areas largest tourist attraction is Whakaari / White Island where thousands of visitors travel every year to Whakatane to board one of the tourist operator vessels that take the 52km trip out to the active volcano.

The Eastern Bay of Plenty population is mostly well spread out, Whakatane is the largest town and has a population of around 18,000. The rest of the area is dotted with several smaller sized settlements. However this grows in summer due to the areas popularity as a holiday destination and it’s warm and sunny climate during Summer.

The proximity to public beaches and outdoor activity make the area a favourite amongst those who live here and the people who visit. 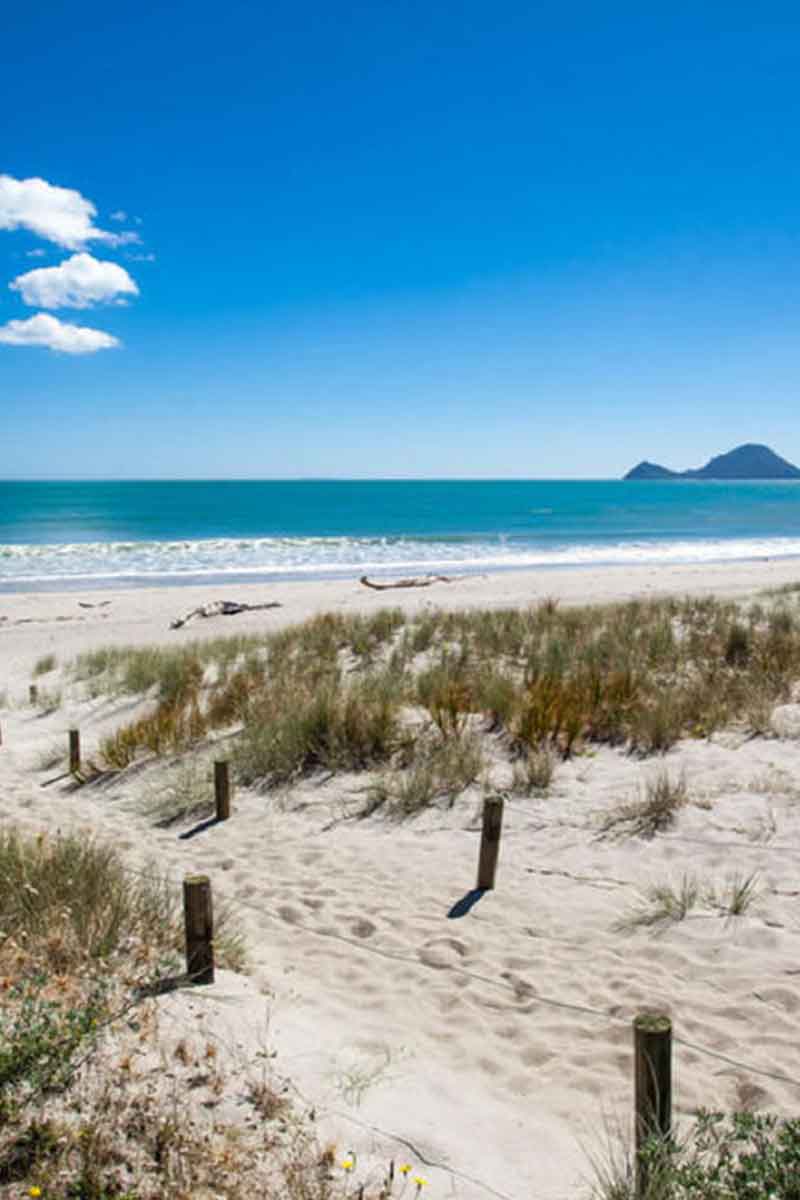 Thornton And The Rangitaiki River

At it’s final destination here at Thronton Beach the Rangitaiki river is a shadow of it’s most powerful having been damed twice, once at Aniwhenua and again at Matahina. However this provides relative safe and consistent flow for users of the mouth facilities and activities. The mouth provides wharf fishing, boat ramp access to the sea and river but in particular the mouth is known for it’s large runs of Kahawai that chase huge schoals of whitebait up the river.

Hence we have become to be known as the “Kahawai Capital of the world.”

The Rangitaiki river has had it’s course manipulated over the years to accomodate the two hydro electric dams and also a change of course in it’s final section from it’s original problematic mouth at Matata to it’s current mouth at Thornton.

Thornton sits on the northern edge of the Rangitaiki plains which surround it in a semi circle to the south. The rangitaiki plains features rich farmland that is some of the most productive dairy farming pasture in the Bay of Plenty.

There are two other major rivers that also end their journeys on the Rangiataiki Plains. They are the Whakatane and the Tarawera rivers. Whilst not as big they are equally well known for different reasons both cultural and geographical.

We have areas of rich farmland, rugged hills, unique river systems and accessability to some of the best sea fishing within the Bay of Plenty.  Thornton is centrally placed to take advantage of all these features and the bounty they have to offer. 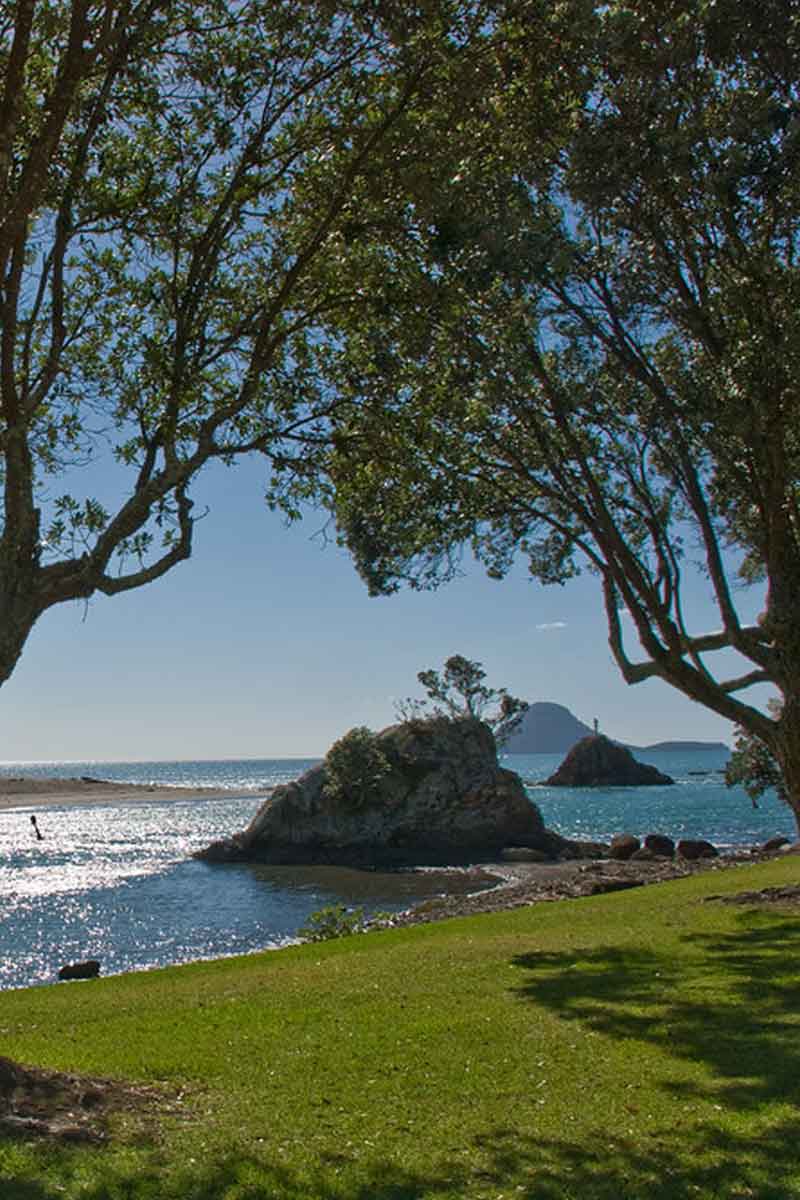 Whakatane just 10 minutes to the East of Thornton is a coastal town of approximately 18,000 people, with another 15,650 people living in the rest of the Whakatane District. According to Maori history Whakatane was the site where Maori first settled in New Zealand some 1000 years ago from their Polynesian homeland of Hawaiki

Being bordered by various ranges and it’s coastal location Whakatane has somewhat of a microclimate. Whakatane is often awarded winner of the annual sunshine hours award in New Zealand and is the 2012 winner.

Alot of the popularity of the area centers around water activities. Swimming with dolphins, whale watching, chartered fishing trips and surfing to name a few.

To complete the regions love affair with the water there is White Island New Zealand’s most active volcano, located 48 kilometres north of Whakatane and the regions most popular attraction.

There are also many land based activities in the area for those who prefer it or when the sea is too rough. Bush walks, horse treks, 4×4 tours, hunting trips, helicopter flights, mountain biking are available or simply relax for a while on one of our beautiful beaches. 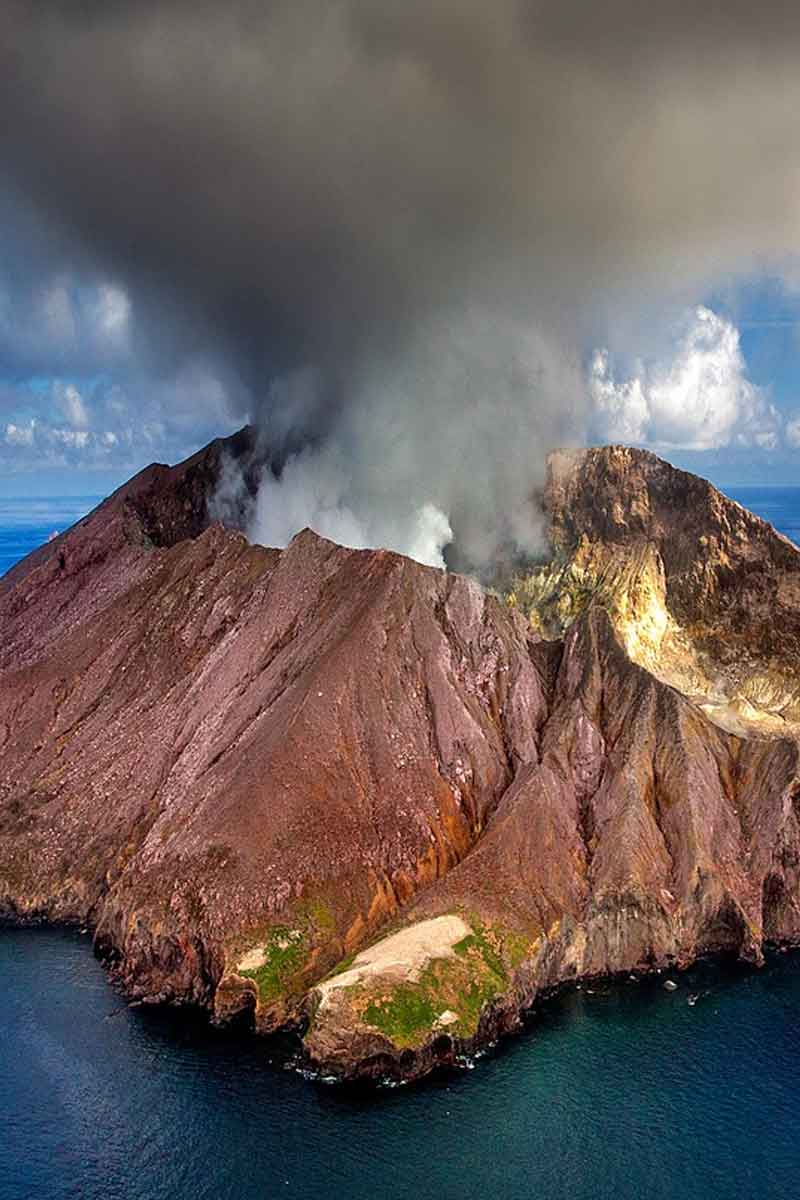 Situated almost 50 km off the Bay of Plenty’s coastline, White Island (or Whakaari as it was named by the Maori before Europeans arrived) is New Zealand’s most active volcano.

But don’t worry, the constant rumblings and large plumes of steam do not mean that the island is about to explode. White Island is a spectacular sight and clearly visible from Thornton Beach Holiday Park.

White Island is a relatively small island of 324 hectares, formed by three separate volcanic cones, all of different ages. Erosion has worn away most of the surface of the two oldest cones and the youngest cone, which rose between the two older ones, now occupies most of the centre of the island. The scenery of this private owned island is spectacular and Whakaari is only accessible from by boat, floatplane or helicopter. For tours from Whakatane, we can recommend PeeJay White Island Tours.

White Island is well worth a visit, as the surrounding are so surreal you think you are walking on the moon. The abandoned sulphur mine is a very special feature. Several companies have mined for sulphur on White Island since the late 1800’s but not one of them were very successful. They got struck by personal or financial disaster every time. By 1930, the depression forced the closing of the works but the remains are still there. 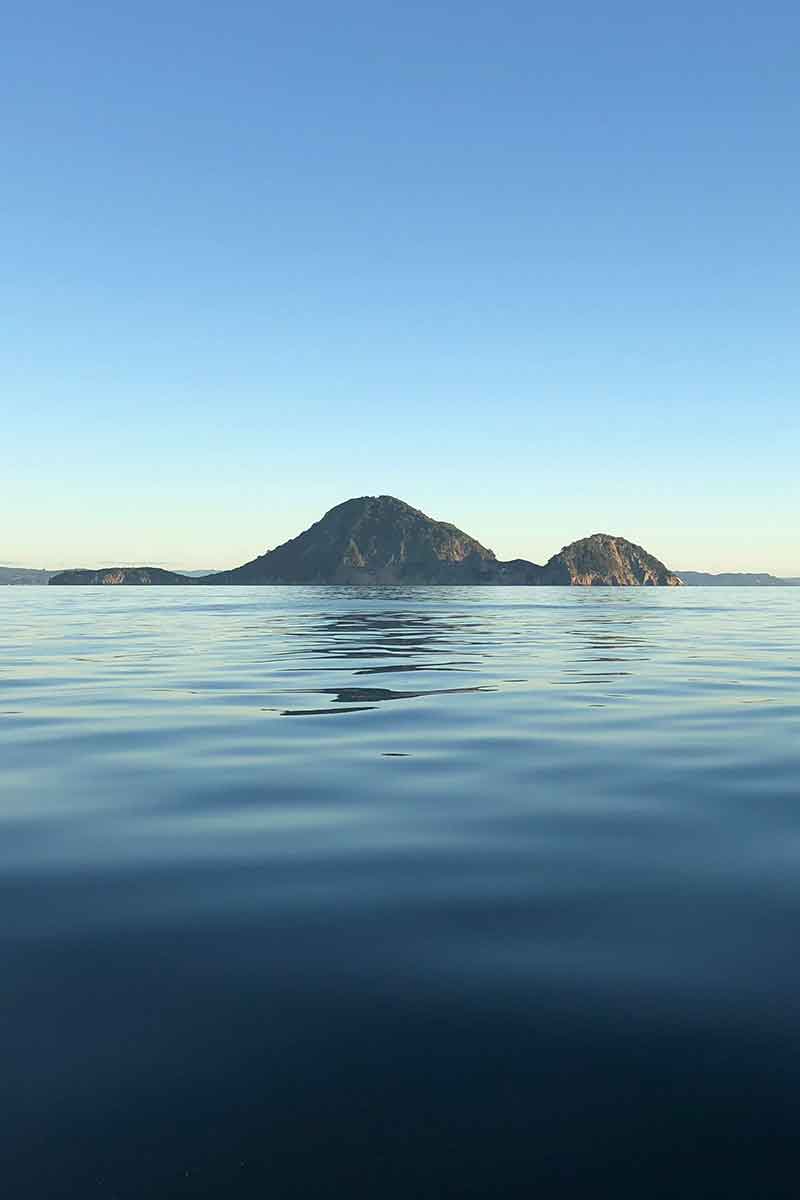 Moutohora, or Whale Island, lies nine kilometres off the coast and dominates the view from our Holiday Park. The 143-hectare island is a remnant volcanic cone which has eroded, leaving two peaks. This is still an area of volcanic activity and there are hot springs on the island in Sulphur Valley and Sulphur and McEwans bays.

Access is restricted to permit holders, approved tour parties and school groups only. Permits can be obtained from the Department of Conservation office in Whakatane.

Numerous archaeological sites of both Maori and European origin have been recorded here, including an extensive pa site on Pa Hill and a number of house terraces and garden sites.  The first European occupation came in the 1830s with an unsuccessful attempt to establish a shore-based whaling station. The venture failed without a single whale being captured.

In 1965 Moutohora was declared a wildlife refuge and the island was bought by the Crown in 1984. Once the goats which had been introduced to the island were eradicated, a planting programme began and 12,000 plants covering 45 species are now established.

Today Moutohora is covered with a mosaic of pohutukawa, mahoe, kanuka, bracken fern and grassland. There are 190 native and 110 introduced plant species. The island is now completely free of the goats, rats, cats and rabbits which previously devastated native plants and animals.